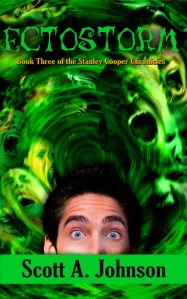 Recently, I had the pleasure of interviewing Scott A. Johnson, author of the Stanley Cooper Chronicles: Vermin, Pages, and the newly released Ectostorm. Scott also authored many other novels, including City of Demons and Deadlands, along with a slew of short stories and articles.

I am a fan of the Stanley Cooper Chronicles, a wonderful series set in my hometown of Pittsburgh. I’ve reviewed Vermin and Pages and will post my review of Ectostorm this week. Here’s my interview with Scott:

Nikki Hopeman: Thank you so much for agreeing to chat with me. Let’s jump right in. When and why did you begin writing?

Scott A. Johnson: I started writing late, in college.  I wasn’t one of those people who wrote all through high-school.  In fact, although I’d been telling ghost stories around camp fires and that sort of thing, I never thought anyone would care about the weird stories rattling around in my head.  I started writing in 2003, when I enrolled in a writing workshop class in college because I needed a credit, and that one fit my schedule.  Honestly, that’s all there was to it.  The first story I wrote was about a guy who woke up in the middle of the night and found his whole family had been butchered.  The next class period, no one wanted to sit next to me.   I loved the reaction and I’ve been writing ever since.  My first novel came out in 2004, traditionally published.

NH: What inspired you to write your first novel?

SJ: What inspired me to write it was kind of a dare to myself.  “I wonder what would happen if…”  That kind of thing.  What inspired the novel itself was the house we were living in at the time.  An American Haunting was inspired by a real house.

NH: What other writers do you consider to be influences on your work and why?

SJ: Richard Matheson is top of the list.  Edgar Allen Poe, H.P. Lovecraft, Clive barker, Douglas Adams, Charles Addams…The list is long and varied.  Those writers are the ones who inspired me, who made me feel what they wanted me to feel.  They have a way, a turn of phrase or an odd perspective, that I crave and love.

NH: What is your general writing schedule like and how long does it take to complete a novel (like Ectostorm)?

SJ: When I’m working on a project, I write a minimum of 1000 words per day.  I usually don’t get to start writing them until after 8pm, and I work until I get those words out.  It usually takes me about four months to write a full novel-length manuscript.

SJ: Horror book is Hell House by Richard Matheson.  Horror movie…Wow, there are so many…  I really love the original The Exorcist, but I also love Poltergeist, Hellraiser, Nightbreed, Alien…  There are too many to count.

NH: What, in your opinion, is the most important element in a horror novel?

SJ: Tension.  Tension is the situation created when someone knocks on the door and the character wants to open it, but doesn’t.  It’s the knowledge that the reader has that something’s going to happen, and the author’s sadistic glee at holding off as long as he can.  Characterization is very important, as is setting, but tension really is the key, in my opinion.

NH: I’ve read all three books in the Stanley Cooper chronicles and Stanley is the kind of guy we can all relate to. Tell us a little about Stanley
Cooper.

SJ: I got tired of tall, muscular, chiseled heroes.  I wanted a hero that was, for lack of a better term, normal-looking.  Short, a little dumpy, bad hair and generally out of his element.  So I came up with Stanley, a poor schmoe who died in an industrial accident, but was revived by paramedics after being dead for a few minutes.  When he came back, he discovered he had the ability to see ghosts and the living energies that surround everything.  Most of the time, he’s out of his league, and he knows it.  But that doesn’t stop him from trying.  True heroes are allowed to be afraid.  It’s just that they don’t give in to fear.  Stanley doesn’t give in to the terror he feels because he can’t.  He’s a good soul.

NH: You’re not a native Pittsburgher. What about the city of Pittsburgh lent itself to be the setting of the Stanley Cooper Chroncles?

SJ: I lived in Pittsburgh for a couple of years, after having lived in Texas my whole life.  I loved Pittsburgh.  I loved the people, the climate, the weird little boroughs, everything.  It made such an impression on me that I needed Stanley to work there.  I could’ve set it in the weirdest city I know, Austin Texas (which is where I live now), but Pittsburgh has a whole different flavor to it.  I love the city and her people, and I look forward to every visit.

NH: Do you see more Stanley Cooper books in the future?

SJ: Sure.  If they sell, I could be happy writing the Stanley Cooper Chronicles for the rest of my life.  I’ve already got ideas for the next three books.

SJ: My agent currently has several manuscripts that she’s shopping around, and I’m always working.  What I’m working on… That sometimes changes by the hour.  I’ll get a great idea and it won’t go anywhere.  But then I’ll see something innocuous and it’ll burn a hole in my brain until it becomes this full story.  Currently, I’m working on something with an old-school version of a monster that’s been nutered in recent years.  When I get done with it, the monster will be a vicious beast again, the way it was intended to be all along.