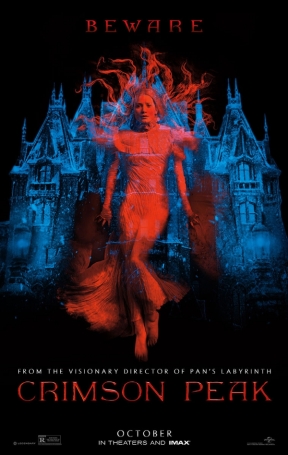 It took me a bit longer than usual to get to Crimson Peak. I am a big del Toro fan, especially the super-fun Hellboy installments, the haunting Pan’s Labyrinth, and the TV series The Strain (based on novels written by del Toro and Chuck Hogan). I’d read mixed reviews of Crimson Peak, and other movies always seemed to take precedent, so I’m a bit late for this one.

Premise: a young woman is swept off her feet by a handsome man and taken to his gothic mansion that sits atop a mountain of red clay. Sinister goings-on reveal a terrible (SPOILER! Lannister-esque) secret and she wonders if she will leave Crimson Peak alive.

I noted that most of the critical reviews of Crimson Peak mentioned that the movie was inaccurately billed as a ghost-centric horror movie but behaves more as a gothic bodice-clutcher.

I agree with that assessment. Stylish and bloody, but not particularly scary. It’s got plenty of tropes, a conventional plot line, and melodramatic woes, but there’s not a disturbing bone in the mix.

Del Toro never fails to deliver a visually stunning film. Crimson Peak is beautiful to watch. The ethereal Wasikowska is lovely and Tom Hiddleston by turns devastatingly handsome and creepy. The costumes are beautiful and the sets intricate and detailed. Del Toro also clearly paid attention to events during the time the story is set, from a cholera epidemic to a Mary Shelley reference.

Despite the eye candy, this movie focuses more on the interpersonal dynamics than the horror elements. I think it would have only taken a few shifts in perspective to make this more of a horror story. One character is slowly poisoned by another, but it almost feels as if the poisoning is an afterthought (not to mention so predictable).

Bottom line: see it for the pretty pictures, but don’t expect to have trouble sleeping.

It’s been a little while I’ve done a movie review. I certainly haven’t stopped watching them, and I take notes, but I haven’t written up a review.

A little while ago I watched the 2010 movie Frozen, directed by Adam Greene. It took a little more suspension of disbelief than usual, but I enjoyed it. My husband, who is an avid outdoorsman, couldn’t suspend disbelief quite the same way I could, and he picked this one apart from beginning to end. 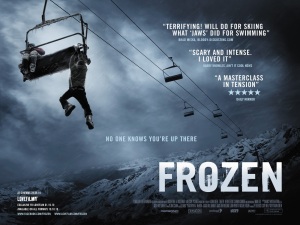 Frozen stars Kevin Zegers, Emma Bell, and the ever-enjoyable Shawn Ashmore (X-Men and the TV mini-series Earthsea. He played Ged. I was not impressed.). The basic premise is pretty simple: three friends don’t pay for lift tickets at a ski resort and are thus unaccounted for when the lift shuts down for the night… on a Sunday… when the resort is scheduled to be closed for the week. They’re stuck on a lift way up high in subzero temps with no way to get down and no rescue in sight.

Some problems we had (or he had… like I said, I was good to play along without too much complaint):

I can make some comparisons to the 2003 movie Open Water. Abandonment, struggle for survival against nature, fairly small perspective. If you didn’t like Open Water, you’re safe knowing that you probably won’t care for Frozen.

I recommend this as a weekend time waster just for the entertainment value. 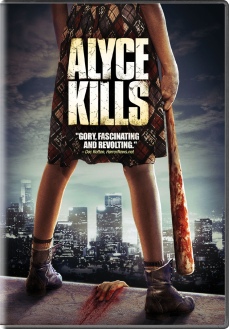 Wow… this one took even my jaded sensibilities by surprise.

Alyce Kills is a 2013 release, directed by Jay Lee, of Zombie Strippers and The Slaughter fame. This is the story of a young woman, Alyce, and her descent into madness.

Alyce is a rather unhappy chick. She works for a woman who resents her and likes nasty little passive-aggressive games. Alyce’s love for her best friend, Carroll, is painfully apparent but unrequited. The girls spend an evening together bonding, despite past tensions over what is apparently Alyce’s tendency to lapse into “single white female” obsessiveness. All the fun things are present: red velvet cake, plans for vengeance upon a cheating ex, and almost-but-not-quite lesbian action. This scene brings to the forefront Alyce’s feelings for Carroll and Carroll’s dismissal.

After the girls visit their drug dealer and score some Ecstasy, they return to Alyce’s apartment and go to the roof where Alyce (accidentally?) pushes Carroll off the roof. Alyce begins to lose her mind and Carroll’s apparition (can’t be ghost, because Carroll doesn’t die immediately) visits Alyce in her home. Alyce turns to more drugs, which she trades sex for, to assuage her pain, but the drugs seem to only fuel her own dive into psychosis. After Carroll’s eventual death, Alyce attends the funeral, only to be thrown out for molesting the corpse… in front of all the funeral-goers. I’m not sure why this scene tickled me so much… but it did. Something new is always good. She’s clearly out of control and when she finally decides to take back her life… she’s so creative.

The story is a good one and I enjoyed the movie immensely. I was surprised at how quickly it turned into a gorefest after a really satisfying slow burn, and it’s so gory it’s almost gratuitous, but I’ll forgive Lee for this because of the creativity with which Alyce goes about her revenge.

Recommended for horror fans and those who like chick flicks with a twist (and can handle a good blender scene).

I’m always intrigued by movies that claim to be based on actual events, particularly horror movies. Most of the horrific things we write about are so far out there it’s unreasonable to assume they’d actually happen. For a movie to bill itself as real horror is fascinating to me.

I was trolling Amazon rentals for something different to watch one night last month and found this one: 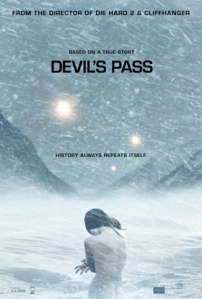 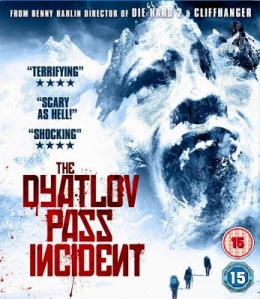 This is a 2013 movie directed by Renny Harlin. The basic premise is straightforward: a group of teenagers read about the “Dyatlov Pass Incident,” which is a real event, and go to investigate.

The Dyatlov Pass Incident refers to the disappearance of nine skiers in the Ural mountains in 1959. When an expected message from the group of experienced skiers did not arrive, search and rescue went after them. They were found dead, in various stated of undress (in below zero temps), with tents ripped open from the inside, and some had fatal wounds that could not be explained. Several of them left the camp barefoot, and radiation in the area was unusually high. Their deaths have never been explained. Really fascinating stuff, and certainly could be the basis for a real life horror. If you’re interested in reading more about this event, I found a good article here.

In the movie Devil’s Pass, Harlin puts his own spin on what might have happened to the original skiers. A group of American college students, interested in the original incident, decide to hike the same path as the party from 1956. As you can imagine, Harlin puts forth his own dramatized theory of what might have taken place in February, 1956. The cast is mostly newcomers, no big-ticket actors, and they do a good job. There’s a good slow burn up to a certain point, after which you have to let go of the “true story” part and just run with it. I had a brief outburst of “WHY??? WHY’D HAVE TO GO THERE???” and then just settled in and enjoyed the end. It was suspenseful, if not believable.

I give it three and a half stars. I had to take one and a half off because of the ending. I would have preferred a plausible idea to what might have happened to the skiers, but on it’s own this is a fun movie.

I can’t figure out how I missed this gem. This movie takes the most cliched tropes of the horror film genre and turns them upside-down, with hysterical and– dare I say it?– heartwarming results. It’s both a celebration and a parody of genre conventions.

Dale and Tucker, my heroes

Tucker and Dale vs. Evil is a 2010 film. A favorite actor of mine, Alan Tudyk, plays one of the title characters, Tucker. I may have overlooked this film when browsing the Amazon streaming videos, but Tudyk’s name caught my eye.

Tucker and Dale vs. Evil is set in Appalachia, West Virginia. Being from Pennsylvania, and more recently having spent the last 16 years in southwestern Pennsylvania, I’ve heard all the West Virginia jokes, and knew this would come into play somehow, most likely with the hillbilly killers terrorizing innocent non-hillbillies. What surprised me was that the typical horror stereotypes were solidly reversed in this movie. Another surprise in store for me was the humor.

This movie begins with a carful of college preppies heading into the woods of West Virginia for some camping. The stereotypes come fast and quick– they forgot the beer, the sorority girls are both blonde and wearing stripper shoes, the frat boys are handsome in their pastel polo shirts.

We meet Tucker and Dale, our two hillbillies in overalls who’ve bought a “vacation home” in the woods and happen to be at the gas station where the kids stop for beer. Dale immediately proclaims his admiration for Allison, one of the girls in the party, and after Tucker encourages him to talk with her– complete with scythe and maniacal laugh– the kids run from our hillbilly heroes.

We see the “vacation home,” which amounts to no more than a run-down cabin apparently used by a serial killer. My husband pointed out a resemblance to the cabin from the horror classic Evil Dead. One poorly timed coincidence after another and Allison ends up in the cabin with Tucker and Dale, after Dale saves her from a near drowning.

While Dale woos Allison with pancakes and Trivial Pursuit, the college kids forge a plan to save their “kidnapped” friend, and in doing so, seal their own demise at their own hands. Tucker and Dale are convinced the college kids came to the woods to carry our a suicide pact. Law enforcement gets involved, until structural issues with the cabin take care of the officer. Hysterical action follows, lots of gore– there’s a wood chipper death! — and Earl Grey tea. I know, right? I loved it.

I was not surprised by the amount of gore in the movie– it’s labeled a horror, after all– but I was surprised at the lack of profanity and nudity. If it weren’t for the copious bodily fluid splattering, I’d almost think I could show this to my kids. This is campy horror at it’s finest.